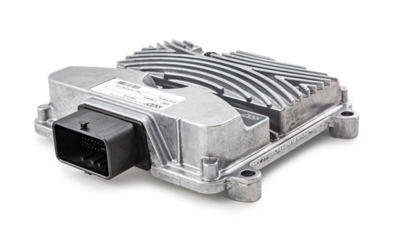 The ESX.3ios is a CAN-I/O module for the extension of the inputs/outputs of a master control unit via CAN. The communication with the master control unit takes place via CANopen, CANopen Safety, the STW protocol ECeS and J1939. The ESX.3ios fulfills the safety requirements laid down in SIL 2 and PL d. For safe communication, the CANopen safety protocol and ECeS are supported. In addition to the Wake-up via terminal 15 / D+, Wake-up can also be carried out via CAN. Due to the robust aluminum die cast housing, a total current of up to 12 A can be implemented. The ESX.3ios has over 16 inputs and 15 outputs.