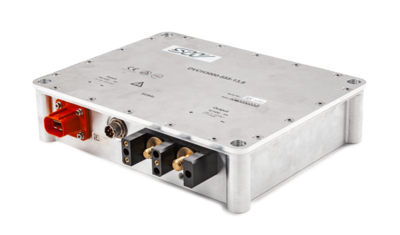 The powerMELA.dcdc converter is a DC voltage converter from HVDC to LV, with an IP6K9K housing and with no active cooling.

The powerMELA.dcdc is a DC voltage converter especially conceived for use in hybrid and electric vehicles with a galvanically isolated switching regulator.
With the wide input voltage range from 400 - 800 V and the output voltage, which can be adapted at any time, the converter completely replaces the function of an alternator. In the different variants, different uses in cars, commercial vehicles and mobile machines are equally possible, and the converter can serve both as a charging device for vehicle batteries as well as for the battery-free supply of low voltage devices.

Robustness
Like all powerMELA components, the powerMELA.dcdc is also characterized by its field-tested robustness.

Control unit
The control and parameterization of the powerMELA.dcdc takes place via CAN bus. Statuses and measurement values can also be queried via CAN.

Cooling
The powerMELA.dcdc is only cooled via natural convection through the air. Due to the realized power and the high degree of efficiency, no active cooling is required. This permits the realization of a device which is compact in form.

Output
Depending on which on-board network possesses the target application, the powerMELA.dcdc is available with output voltages of 12 V / 24 V / 48 V.