The story is somewhat reminiscent of Asterix and Obelix: Whereas the large German commercial vehicle manufacturers remain reticent with regard to the electrification of large trucks, three medium-sized companies from the tranquil Allgäu region have developed an electric truck which is also able to compete with its diesel counterparts in everyday forwarding business.

The Allgäu region is well-known for its mountains, lakes and the relaxation which stressed city-dwellers are able to find here. What remains hidden from most holidaymakers, but is well-known in Germany and around the world, is that there are companies working here on ideas and innovations for very different branches. For example, the three medium-sized companies Spedition Ansorge, Toni Maurer and Sensor-Technik Wiedemann (STW). These three companies joined together to create the project ELIAS in order to completely electrify a heavy-duty truck able to produce the same performance and conventional level of comfort. Once again, this is a solution which could draw attention from far further away than the Allgäu region.
At an early stage, long before the diesel scandal and the blocking-off of inner cities, the companies jointly began to consider how to react to future changes in heavy-duty traffic. The supply and disposal to and from industrial businesses or food stores in inner cities or at the edge of densely-populated residential areas takes place through trucks, which shuttle between logistics centres and customers. Logically enough, this “last-mile” traffic runs over short distances, always along the same routes. Through the exhaust gas and noise emissions caused by conventionally-operated trucks, the inhabitants of adjacent residential areas are substantially burdened by pollution, often up to threshold values. This has already led to official restrictions being imposed on truck shuttle traffic, which aim to limit exhaust gas and noise emissions to bearable levels. However, such procedures also limit the capacities of companies through these official regulations. Companies may even under certain circumstances be slowed down in their expansion. The ELIAS project addresses precisely this problem, and offers a solution which assists residents, forwarding companies and companies alike.

Objective
The objective was to make no compromises with regard to the permitted total weight, performance and comfort for shuttle and short distance operation. The use of a standard truck as a basis offered, in addition to the retention of driving comfort, the additional advantage that binding directives, laws and regulations were upheld in the non-modified system components. All the processes in which the new system components were developed are oriented on the ISO26262 Ed. 2, the standard for functional safety in the automotive sector, for their entire lifecycle. Additional requirements and inspections from the UN/ECER10 (EMC), UN/ECER100 Electrically-propelled vehicles and the pertinent industrial standards for electrically-driven vehicles underline the aim of creating a basis for subsequent vehicle generations. The project is promoted with the aid of an industrial research project by the Bavarian Ministry of Economics and is carried out by the three cooperating industrial partners.

Distribution of work within the project
For the validation of the application potential of the e-truck for logistics services and the verification of the envisaged technical target criteria through operating data assessment of the field tests, the collaboration with Spedition Ansorge as pilot user is essential. In this way, the defined target specifications can be directly verified in application. This recording of data forms a further basis for the development of the ELIAS as a series vehicle. Toni Maurer GmbH is one of the largest European companies involved in the special construction of trucks and truck modifications. They took the lead in developing the requirements catalogue for the electric drive as well as the mechanical conversion and the integration of the electric drive system control in the standard truck provided for the purpose. STW are specialists for electrics and electronics in the solution areas digitalization, electrification and automation in mobile machines. The company supplies both the necessary drive technology as well as the electronic control units for the integration of all components of the electric drive line into the cross-vehicle CAN system of the basic vehicle. The hardware and software for the Battery Management System (BMS) also comes from STW. In addition to the company’s own electronic hardware and software components, partner products for the performance and control integration of the electric drive system are used.

The challenge
The control unit of the drive package was the biggest challenge. It has been designed using an ESX control unit, a standard product by STW, into which the application was programmed according to the safety standards based on the library “eDrive Lib”, also by STW. The 32-bit control unit includes integrated safety functionalities as well as various safety-critical and non-critical operating modes. The electrical and wear-free regenerative brake system can feed most of the energy back to the battery. The core of the modular drive package is two 140 kW synchronous motors (STW designation: powerMELA-C). These transmit their power to the existing gearbox in the basic vehicle and ensure the necessary torque on the axle. Through the integration of the converter into the motor housing, wiring between the converter and motor is no longer required. An enclosed, compact unit with a protection class of IP6k9k results. This, and the dual protection construction, mean that the powerMELA-C motors are perfect for this mobile application. Through the use of the automated gearbox, the driving performance and the driving comfort of the electric truck remains equal to those of conventionally-powered vehicles. The entire energy management of the vehicle, both during the charging process as well as in operation, is executed on the basis of the library “ePower Lib” on a further ESC safety control unit. In the background, calculations on the energy being supplied and discharged run constantly, so that the availability of the system always remains maximally predictable.

Flexible battery capacity
New in such a project is the scalability of the battery capacity. With up to four battery packs and therefore a total capacity of 400 kWh, the truck can adapt flexibly to different tasks. A battery technology with independent, active thermal management by Kreisel is used for the battery packs. Kreisel, on the other hand, relies on the “modular Battery Management System” (mBMS) by STW. This modular system comprising hardware and software components permits the realisation of a safe management system for high-voltage batteries. The sensor components within the battery system are used for the measurement and monitoring of the individual cell voltages and temperatures, the currents and the determination of the insulation condition. The dynamics, performance and efficiency of the electric accumulators are dependent on the state of charge (SOC), the state of health (SOH) and the temperature of the battery. These safety functions are a major component of the battery management used. Through the integrated temperature control and the efficient connection technology, the batteries achieve maximum range, lifetime and performance.

Charging the battery and the truck at the same time
The battery storage is charged whilst the semitrailer is being loaded/unloaded, meaning that the charging times do not disrupt business processes. ELIAS has an integrated high-voltage distribution which provides a CCS charging interface both for DC quick charging as well as AC on-board charging. ELIAS is also able to obtain the energy from regenerative sources, for example a company’s own photovoltaic systems. The system is therefore designed so that it can also be charged at all public charging stations. No less important for the success of an electrical solution is the driver. They should – except for the quiet and more powerful drive – not notice any difference with regard to comfort and function. The driving functionality is absolutely comparable with conventional vehicles. This is ensured through numerous driver assistance systems such as the electronic stability program (ESP), the electronic brake system (EBS), the anti-blocking system (ABS), the emergency braking assistant (EBA), the emergency brake signal (ESS), the lane guard system (LGS) and a digital tachograph. The functions of the air conditioning system with permanent cooling function and an electrical heating with a preheating system can also be used. During acceleration and smooth running, electrical systems actually have an advantage in comparison to conventional diesel drives.

Bringing electric power onto the roads
In 2018, the partners presented the commercial vehicle ELIAS for the first time to a wider public at the IAA commercial vehicles exhibition in Hanover, where it generated a lot of interest amongst visitors. Over and above this, it is becoming apparent that electromobile applications are increasingly establishing themselves in many industrial sectors, in part due to public interest and the appropriate promotion, and in part through the considerations of institutions and companies themselves as well as the expected regulatory obligations. The partners see an increasing need for electric delivery traffic, and wish to bring even more electric power onto the roads in future – also outside the Allgäu region.

The ESX-3XL, which is certified in compliance with the DIN IEC 61508: SIL 2 and DIN EN ISO 13849: PL d standards, acts as a driveline controller and controls the tensile force limitation as well as the automatic start-stop system. The ESX is parameterized via the STW Toolchain to enable it to fulfill all safety specifications. 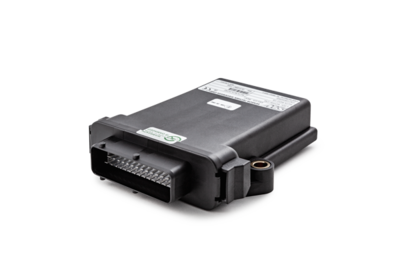 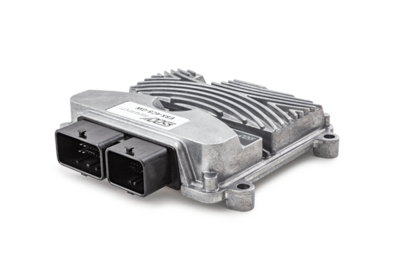