Students build race cars to compete against other teams in Formula Student and to gain practical experience. In doing so, they can rely on being supported by companies such as STW.

Lots of companies complain that recent graduates have little practical experience and first have to be familiarised with the practical aspects of their job. The core idea behind the international construction competition Formula Student is to address this issue. The competition involves designing and manufacturing a single-seater Formula race car in teamwork to compete against teams from all over the world. The competition is held in two different classifications: Formula Student Combustion (FSC) for vehicles with combustion engines, and Formula Student Electric (FSE) for electric vehicles. However, speed alone is not the decisive factor for winning. Instead, the team whose concept can convince equally well on the theoretical level as well as in practical comparison with other vehicles in different driving disciplines, and also in economic terms, will be the winner.

The students organise themselves completely independently: Management and team structure are at the end of the day just as important as the development and manufacturing of a race car in order to be able to prevail against the other teams.

One of these teams is Global Formula Racing (GFR). This unique cooperation between students of the Oregon State University (USA) and the DHBW (Cooperative State University of Baden-Württemberg) Ravensburg was brought into being in 2009, and since then has achieved remarkable successes. Every year, one vehicle with a combustion engine (FSC) and one electric vehicle (FSE) are collaboratively developed and built, despite a time difference of 9 hours and a distance of 8,700 km. To minimise costs and efforts, both vehicles share central parts of the overall concept, for example the carbon fibre body, wheel suspension and aero package.

This year, considerable changes were made in the fields of aerodynamics, car body and chassis in order to fulfil the team philosophy of simplicity and robustness. This concept is particularly conspicuous in the car body, which has become considerably more angular  compared to the previous years. In this way, manufacturing time could be halved, with little effect on the overall performance of the vehicle.

The results reflect that the changes as a whole are successful: The first places won the previous year at the events in Michigan (USA), Hockenheim (Germany) and Spielberg (Austria) could be successfully defended with the combustion engine, whilst the electric vehicle also had a successful season with a 4th place in Germany and a 3rd place in Austria.

In the FSE, energy management in electric vehicles is a core challenge, just as it is in normal road traffic. Due to the lightweight construction of the Formula Student vehicles, the battery makes up to 30% of the total weight of approximately 200kg. In comparison: The battery pack of a Tesla Model S alone weighs three times as much as the students’ race car.

In order to dimension a vehicle for racing as optimally as possible, it is expedient to design a very lightweight battery – but this can only be effected by reducing its capacity. At the same time however, for the Endurance race over 22km, which is a highlight of the dynamic disciplines in Formula Student, there has to be sufficient energy in order to utilise everything the vehicle has to offer. An additional challenge is generated by midsummer temperatures on the large asphalt surfaces at the venues, as for safety reasons the battery cells may not exceed temperatures of 60°C.

A maximum power consumption of 80 kW during the different dynamic disciplines represents another limitation for the electric vehicles in Formula Student. Breaching this rule will result in disqualification of the team in the respective discipline. As the vehicles are mostly capable of bringing considerably more power on the road than the maximum allowed to be taken from the battery, a control system is required which prevents violations of the performance limit. In this context, you also need direct feedback from the system to the control system, as you do with every other controller.

For this purpose, GFR has been able to count on the support of Sensor Technik Wiedemann (STW) for several years now. Due to its small dimensions, the Power Measurement Board (PMB) provided can be directly integrated into the battery housing and convinces through its reliability. “Power measurement with the STW module is a key aspect of energy management in electric racing vehicles”, says Oliver Fröhling. With a minor modification, it was also integrated into the mandatory safety circuit for the high voltage path.

This is only one of many examples of the students’ professionalism in cooperating with sponsors, and also the need for support from the industry. Sponsors also benefit from the racing series: “Formula Student” represents an investment in the engineers of tomorrow.

The modules are extremely compact and also act as a part of the safety circuit in the HV path. In addition to the PMB (Power Management Board), STW repeatedly supports universities with the electrification of vehicles 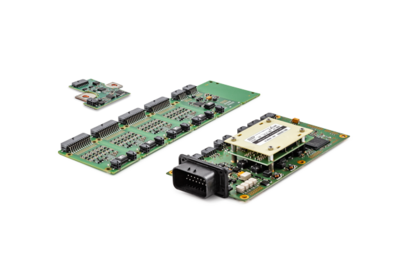